How could telematics and optimisation tackle the UK’s growing congestion problem?

The research is the largest ever study of its kind with Inrix using big data to analyse congestion in 1360 cities in 38 countries. The report suggested that the cost of congestion to UK drivers totalled over £37.7bn in 2017, or an average of £1,168 per driver.

It comes as no surprise that London was highlighted as the UK’s most congested city with motorists spending, on average, 74 hours in traffic every year. Manchester, Lincoln and Birmingham were also listed amongst the most problematic areas for time spent in gridlock.

Dr Graham Cookson, Chief Economist at Inrix, has called for transport authorities to explore technological solutions to tackle the issue.

He said: “Increased flexible working or road charges have potential, however, transport authorities should be looking to exciting developments in data analytics and AI which promise to reinvent our approach to traffic management.”

What does congestion mean for businesses?

In addition to being a huge inconvenience to drivers of commercial vehicles and commuters, congestion has an unprecedented impact on the economy through lost productivity and disruption to supply chains.

Dr Graham Cookson added: “Combined with the rising price of motoring, the cost of congestion is astonishing – it takes billions out of the economy and impacts businesses and individuals alike.”

For businesses that depend on commercial vehicles, meeting the tight criteria of delivery windows and arriving on time is crucial to customer satisfaction and unfortunately, the “I was stuck in traffic” excuse simply doesn’t rub with most. In addition, time spent in traffic has a significant effect on fuel consumption.

How can you avoid traffic congestion?

The truth is, you are never going to be able to avoid traffic altogether. There are, however, a few ways you can use technology to help.

Telematics software enables you to see company vehicles on a real-time map but any good provider will also enable you to add overlays to your map. These overlays include real-time traffic data, allowing you to spot problematic routes early and to inform your drivers to take a different path if possible. For drivers that work nationwide, you may also benefit from using weather overlays by identifying poor conditions such as snow, ice and heavy storms which are likely to cause disruption to your drivers. Think of the software as a crystal ball for businesses!

Some telematics providers, including Trakm8, also enable businesses to find the nearest vehicle to a job. By finding out which driver is within the vicinity of a customer’s address, business owners or transport managers can be assured that vehicles are taking the shortest routes, reducing the likelihood of being involved in heavy congestion.

In addition to telematics technology, Trakm8 offers route optimisation that can help reduce the number of delivery vehicles on Britain’s roads. Routes are optimised in order for drivers to complete jobs with the least amount of vehicles possible and with the lowest cumulative mileage. Recent research found that, for 30% of the total mileage driven by trucks in the UK in 2016, those trucks were completely empty. Higher utilisation rates mean that delivery companies take empty trucks off our most congested roads.

Trakm8 Optimisation even goes a step further, with dynamic route scheduling software. This integrates with businesses’ online ordering systems and calculates the best routes for drivers to take in order to fulfil all jobs in the most efficient manner. The real magic, however, happens when drivers leave a depot or headquarters. The algorithm within the scheduling software enables the route or delivery schedule to be changed automatically according to real-time factors such as heavy traffic, or when a customer makes a last-minute change to their specified delivery window.

Telematics also allows businesses to monitor the time vehicles spend idling. By identifying routes that are likely to be congested, businesses can take the relevant steps to ensure engines are switched off. If an area stands out as a notorious contributor for idling, drivers can be made aware that they need to switch off their engines if they are likely to be at a standstill for longer than a minute. These locations could be roads within city centres that are renowned for heavy congestion or stretches of motorway with ongoing roadworks.

If your business is looking to avoid lost productivity or wasted fuel consumption as a result of congestion, simply fill in our web form below and one of our staff will be in touch to explore your requirements and to discuss the technology which could address your issue. 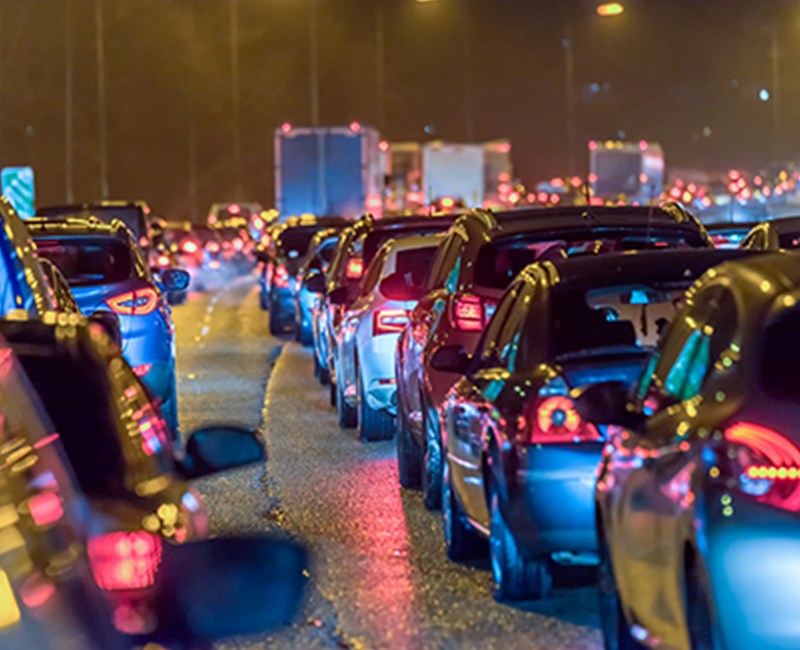