What are the environmental advantages of having an EV fleet?

What are the environmental advantages of having an EV fleet?

Since the UK Government brought forward its plans to end the sale of new petrol and diesel-powered vehicles to 2030, and hybrids to 2035, the demand for electric vehicle fleets has grown even stronger.

Throw in rapidly rising fuel prices, vehicle tax, and environmental considerations, and you’ve got yourself a compelling case for making the switch to an all-electric fleet. Notable for their incredible fuel efficiency and environmental benefits, electric vehicles (EVs) are a cost-effective way to reduce operational costs while also protecting the environment and helping organisations remain compliant with sustainability best practices and environmental guidelines.

The pollution that’s caused by internal combustion engine (ICE) vehicles isn’t limited to the fumes pumped out by exhausts. The process of extracting oil, refining it into fuel and then transporting it to petrol stations also generates a huge amount of air pollution.

These are known as ‘well-to-wheel’ or ‘upstream’ emissions and they’re unavoidable for ICE vehicles. So, even though modern ICE manufacturers have found ways to lower the harmful emissions pumped out by their vehicles, the fuel manufacturing process continues to have a devastating impact on the environment.

At the same time, the production of EV batteries also creates upstream emissions, and these can be more taxing on the environment than those of ICEs. Despite this, EVs are still the cleanest option overall for transportation because, when you factor in the full lifecycle of the average EV, they’re much more sustainable.

If the prospect of producing lower carbon emissions wasn’t enough, the growing interest in EV fleets is also being fuelled by a rapidly expanding charging network, increasing affordability, the introduction of congestion charges in major cities, and the introduction of government grants, tax breaks, and subsidies.

Key that EV fleets are better for the environment

Here’s a look at five different ways that EV fleets are better for the environment than petrol and diesel-powered alternatives.

Fully-electric vehicles don’t need an exhaust pipe because they don’t produce any fumes. In a traditional engine, petrol or diesel is combusted which creates energy at the cost of producing harmful emissions.

In contrast, the batteries found in an EV are completely free from these emissions. The most common type of EV battery, lithium-ion, can go through thousands of charge cycles without directly producing air pollution.

One of the arguments commonly made in the ICE vs EV vehicle debate is that while EVs don’t produce emissions themselves, the battery charging process does.

While this is true to an extent, the contribution to carbon emissions by fossil fuel-powered charging stations is negative in comparison to ICE emissions. In China, for example, the rapid growth of EVs has seen a 20 per cent reduction in greenhouse gas emissions despite fossil fuels being used to power the majority of the country’s EV charging infrastructure.

Furthermore, the proliferation of renewable energy infrastructure and the use of green energy in the power grid means that many EV charging stations are now powered either wholly or in part by renewable energy.

While EVs don’t produce any pollution on the road, the battery manufacturing process can be very harmful to the environment if handled irresponsibly. Almost all EV emissions are upstream emissions generated during the manufacture of batteries, and industry standards are inconsistent due to EVs still being a relatively new technology—this leads to the generation of larger amounts of emissions.

This is quickly beginning to change, though. Today’s EV batteries have a carbon footprint that’s two or three times lower than just a few years ago, and they’re growing ever-cleaner with each passing day. Many battery manufacturers are also starting to set guidelines for their materials suppliers, such as requiring them to only use renewable energy sources in their own production processes.

In addition to making battery production greener, most EV manufacturers are also looking to incorporate greener materials into their vehicles themselves. One of the major obstacles facing EV manufacturers is producing vehicles that are both lightweight and functional, and the best way to do this is by replacing traditional, heavy materials such as steel in certain components with recycled, organic, and lightweight materials.

EVs have a lower lifecycle impact

Lifecycle analysis—which accounts for all the emissions produced by vehicles from the mining of ores to the manufacture of vehicles and batteries and the use of these vehicles on the road—has shown large overall emissions reductions for EVs when compared to conventional vehicles.

According to a 2018 publication by the UK Government titled ‘The Road to Zero’, EVs “have substantially lower greenhouse gas emissions than conventional vehicles, even when taking into account the electricity source and the electricity used for battery production. Assuming the current UK energy mix, battery electric vehicles produce the lowest greenhouse gas emissions of all the energy sources and fuels assessed, irrespective of vehicle type and operation.”

Electric vehicles are the future

There’s little doubt that electric vehicles and EV fleets are much better for the environment. Once EVs hit the road, they produce much lower emissions than cars powered by fossil fuels, and even when charging their contribution to emissions is substantially lower than the production of petrol and diesel.

If you’re thinking about making the switch to EVs for your commercial fleet, you might be worried about the challenges involved. While managing an EV fleet is similar to managing a conventional fleet, considerations like battery life and fleet recharging present a novel challenge—and that’s where EV telematics can help.

At Trakm8, we’re the leaders in fleet tracking and fleet telematics technology. Our EV telematics technology helps you to monitor your fleet from anywhere in real-time to improve efficiency, save costs, plan better routes, schedule vehicle recharging, and more. Read more in our Guide to Electic Vehicle Telematics.

Talk to us today to learn how our innovative electric vehicle telematics technology can help you. 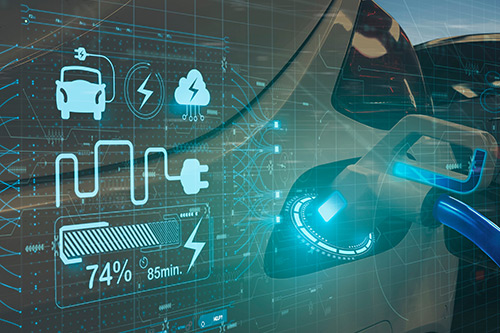